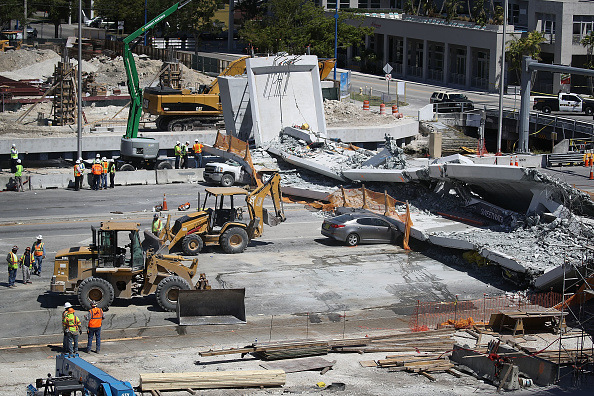 The painful lessons of failure

In March 2018, the public was stunned when, mid-afternoon on a Thursday, a pedestrian bridge under construction at Florida International University (FIU) collapsed onto the traffic below it. This blog post is the third in a series about this bridge disaster.

Part 1—The Events reviewed the days leading up to the collapse. Part 2—The Participants explored the underlying circumstances that may have contributed to the catastrophe.

In this final post, The Lessons, we will look at the painful “take-aways” from this tragedy, ways to mitigate risk on construction projects, and ways to reduce future mistakes and oversights.

As a reminder, the key participants in the bridge construction included:

In the six days between when the bridge was moved over to active lanes of traffic and the collapse, ineffective communication between the team members contributed to incredibly unsafe travel and construction conditions. Simple communication mistakes were made by the bridge development team that could have reduced or eliminated the dangerous conditions and the loss of life.

This infographic provides a review of the days leading up to the collapse.

To examine the lessons learned, we will use the acronym SAFETY as a mnemonic.

S – Speak up, especially in meetings

T – Talk rather than email

Y – YOUR Responsibility. Don’t assume others will take care of it.

Lesson #1 – Speak Up, Especially in Meetings

On March 15, MCM, BPA, FIGG, and others met in MCM’s trailer to discuss the bridge and determine the next steps. At the meeting, cracks were a known problem and were beyond the size considered safe by some members of the group.

FIGG had been analyzing the cracks remotely and had only looked at them in person an hour before the meeting. FIGG stated once again they posed no safety concerns. Their recommended mitigation included re-tensioning the steel rods supporting the concrete. However, no decision was made to close the street.

We don’t know exactly how the project owner, MCM, or the watchdog group, BPA, responded, but we do know that no one called an audible to say, “Regardless of the assurances by FIGG, we have safety concerns. We need to close the street immediately until we figure out the problem.” As a result, when the steel rods were re-tightened in the afternoon, traffic was tragically still flowing beneath the bridge.

This analysis is in hindsight, but the reality is that speaking up and fighting a group consensus is often difficult. When there is enormous pressure to move a project forward despite known concerns and the experts in the room say everything is ok, how do you find the voice to articulate your concerns?

One way is by letting everyone know you will be playing devil’s advocate. You can begin by reminding everyone of the stakes involved, and that you don’t want the team to fall into the trap of Groupthink or other biased thinking. If necessary, remind the group of historical situations where Groupthink was involved, including the Challenger Disaster, the Bay of Pigs and the Bridge Collapse discussed in this series.

During the Bay of Pigs, President John F. Kennedy assigned his brother, Robert, to be the voice of dissent. But even if the group leader does not assign roles, there are things you can do as a participant:

One of the best ways to stimulate discussion is to ask questions. In the week between the move and the collapse, there were multiple opportunities for the team to ask FIGG the tough questions such as:

Why is the bridge cracking?

Why don’t you think it poses a safety risk?

Why are you recommending re-tensioning the bridge as the solution?

Asking the question “why” often makes people uncomfortable because it forces them to examine their thinking and decision-making process. But in this case (and in other situations) it is absolutely essential to obtaining a complete answer.

If you find your questions are putting people on the defensive, there are different ways to ask “why” without actually using the word.

How did you come to that conclusion?

What was your decision-making process?

Where did you get your data?

Tell me about your analysis?

The most important thing is to get all the information on the table and open up communication. If you do take on the role of question-asker, there are also tactics you can use to get the most complete answer possible.

The OSHA report stated that FIGG repeated multiple times the bridge did not pose a safety risk to the public. But, when dealing with a 900-ton concrete bridge poised over a road with 66,000 cars a day driving underneath it, people’s safety should have been paramount. Safety comes first and is more important than costs, delays and egos.

Every project should have proper safety procedures in place. If your company or project owner does not have a plan, then ensure one is developed. The OSHA website is a good place to start.

Safeguards should then be reviewed periodically during each project. If any potential life safety hazards arise (such as widening cracks), the project should be stopped until proper measures are taken.

In the case of the FIU bridge, the roadway could have been closed as soon as the first cracks appeared and remained that way until all safety concerns had been resolved.

Although it is hard to predict the future, the price of not speaking up about safety may have grave consequences. This powerful poem by occupational safety advocate, Don Merrill, says it all.  If you have your safety checklist set up and you are encouraging open dialog, you can go a long way to preventing negative outcomes.

In the case of the bridge collapse, FIGG was the group expert. They had the engineers, they designed the bridge, and they were the lead in analyzing the cracks. Clearly, there are mistakes inherent in this single-source analysis.

Why was FIGG the only group responsible for the analysis? When a group is invested in a project, they are susceptible to many decision-making biases, such as confirmation bias and the overconfidence effect.

One way to explore alternatives is to ask everyone in the group to provide independent observations and recommendations. Contrary to popular belief, brainstorming while in meetings is not as effective as having people do their own creative thinking, as an article on brainstorming in Harvard Business Review describes. Based on studies, groups come up with fewer ideas together than separately. Another recommendation is to take your time. Rushing to conclusions because of deadlines or discomfort with uncertainty crushes creative thought.

Lesson #5 – Talk rather than rely on email.

Throughout the six days, multiple texts, emails, and pictures were sent between the groups. In addition, voicemails were left, sometimes without a response.

Email and text are good for some types of communications, but they have limitations. They can cause time delays and can be misinterpreted. Calls or talking in person are much more effective when relaying complicated or confusing information, when there is urgency involved, and when there are a lot of unanswered questions.

If you want to relay visual information such as photos, an email is appropriate, but it should be followed by a phone call to explain and review. The amount of time saved by calling vs. sending emails back and forth can be exponential. Although email can feel “safer,” it is not the best solution when solving complex problems.

This lesson is the toughest one of all. As individuals, we know we are responsible for our own actions. But in groups, we tend to feel less responsible for outcomes because others are present. This very dangerous reality called Diffusion of Responsibility is defined by Wikipedia as:

A phenomenon whereby a person is less likely to take responsibility for action or inaction when others are present… The individual assumes that others either are responsible for taking action or have already done so.

In a group, we assume someone else will handle the problem. The larger the group, the less obligation we feel. In the case of the FIU bridge, there were multiple companies, each with multiple employees involved, and it appears that no one individual had the ultimate job of deciding whether or not to close the roadway.

At the morning meeting on March 15, multiple representatives from five (5) different companies were present to review the findings. FIGG had determined that they were going to recommend tightening the steel bars with traffic still moving beneath the bridge. The rest of the group agreed with them, whether or not they individually believed it was the right course of action.

It turns out that in a group if one person changes their behavior and takes action, a new norm is established, and other people will most-likely also step-up and help. In addition, if people are asked to assist with something specific, they will usually do so.

Which brings us back to lessons learned. Be aware of the natural human tendency to do less as a group gets larger, we must train ourselves to step up and speak up.

All the recommendations above can come down to this final one. If we see ourselves as independent people who try to do the right thing, rather than just employees or project managers, we will be more willing to engage in SAFETY:

Doing what it takes to make sure a job is done safely then becomes the reward in itself.

In hindsight (which of course is 20/20) there is not just one factor, but many that led to the Florida bridge collapse of March 15, 2018. Incomplete information, poor communication, a lack of urgency, and biased decision-making by the extended team created an unsafe environment for both the workers and the public.

In the days between when the bridge was moved over the roadway and the collapse—while the cracks were lengthening and widening—there was ample time to take decisive action to focus on the safety of the people involved as well as the public.

Instead, the group listened to the conclusions of the engineering subcontractor who insisted over and over that the bridge was still safe, that the cracks were minor, and that they would be minimized by future construction.

Without a dissenter in the group to speak up, plans were made to re-tension the steel bars during the middle of the day while the street was still open, without adding sufficient shims to stabilize the bridge if something went wrong.

What all this speaks to is that the construction industry as a whole needs to step up and realize that we have a huge responsibility to protect the public. Implementing the SAFETY acronym recommendations or something similar can make a project more successful and reduce the chances of a disaster as well as safety problems.